Join the Battle for Net Neutrality

We’re in the battle for the net. Cable companies are spending millions to gut net neutrality and slow your internet to a crawl. We can’t let them. Take action on September 10.

The Internet’s Own Boy, Aaron Swartz

The story of programming prodigy and information activist Aaron Swartz, who took his own life at the age of 26.

*The Creative Commons-licensed version of The Internet’s Own Boy.

Big cable operators like Comcast and telecommunications firms like Verizon, which brought the lawsuit on which the court ruled, will be free to pick winners and losers among websites and services. Their judgment will most likely be based on cold hard cash–Netflix wants to keep your Internet provider from slowing its data so its films look like hash? It will have to pay your provider the big bucks.

Net neutrality is dead. Bow to Comcast and Verizon, your overlords – LATimes.com

Silicon Valley to White House, NSA: “What the hell are you doing?”

Silicon Valley to White House, NSA: “What the hell are you doing?” | Ars Technica

Tech Companies, Government May Go to War Over Surveillance

There are new interception hurdles everywhere you look. Even plain old SSL encryption is becoming more difficult to snoop on. Previously, governments could rely on complicit or compromised certificate authorities to provide them with the means to intercept encrypted traffic. Thanks to the Iranian government’s overly enthusiastic use of this technique, Google made changes to the Chrome browser to neuter the practice. Similar updates are expected soon in Internet Explorer. There goes another interception technique for law enforcement!

Recently, the network research and analytics company Renesys tried to assess how hard it would be to take the world offline. They assessed disconnection risk based on the number of national service providers in every country, finding that 61 countries are at severe risk for disconnection, with another 72 at significant risk. That makes 133 countries where network control is so centralized that the Internet could be turned off with not much more than a phone call.

Cory Doctorow on the “privacy bargain”, the war on computer freedom, and his dreams of a ‘techno-utopia. Are you being tricked into giving up your privacy? In an age of social networking, when people everywhere are sharing personal information in exchange for free services, are we over-looking the value of our personal data?

The nation’s major internet service providers on Monday said they are beginning to roll out an initiative to disrupt internet access for online copyright scofflaws. The so-called “Copyright Alert System” is backed by the President Barack Obama administration and was pushed heavily by record labels and Hollywood studios.

Dubbed a “privacy killer” by online activists, love it or hate it, the cyber-security CISPA bill will likely be brought into law—whether it’s from the reintroduction of the bill by the U.S. House Intelligence Committee, or President Obama issuing (yet another) executive order.

In honor of the transparency fights that coder and internet activist Aaron Swartz led while alive, an online records processing service has submitted more than 100 public records requests on behalf of members of the public. 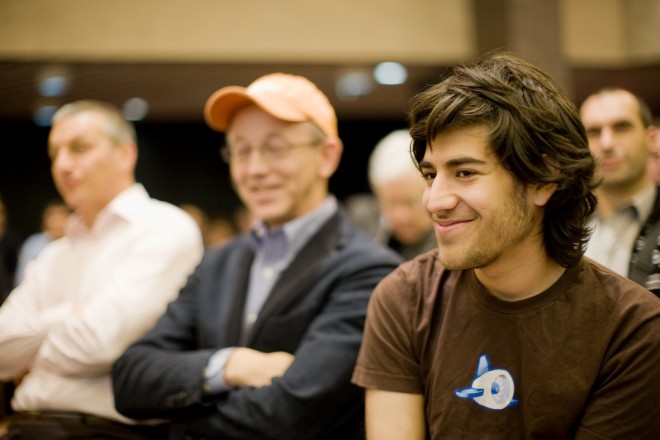 We often say, upon the passing of a friend or loved one, that the world is a poorer place for the loss. But with the untimely death of programmer and activist Aaron Swartz, this isn’t just a sentiment; it’s literally true. Worthy, important causes will surface without a champion equal to their measure. Technological problems will go unsolved, or be solved a little less brilliantly than they might have been. And that’s just what we know. The world is robbed of a half-century of all the things we can’t even imagine Aaron would have accomplished with the remainder of his life.

Aaron H. Swartz speaking at ThoughtWorks tells how a tiny number of online activists managed to defeat SOPA, the Internet censoring bill, pushed by the entertainment industry, which had spent hundreds of millions of dollars per year trying to get it passed.

United Nations asks for control over the world’s Internet

United Nations asks for control over the world’s Internet.

Telecom companies across the world may be given the opportunity to dig through data passed across the Internet more easily following a move to allow the United Nations new authority to regulate the Web.